Sikhism, religion and philosophy founded in the Punjab region of the Indian subcontinent in the late 15th century. Its members are known as Sikhs. The Sikhs call their faith Gurmat (Punjabi: “the Way of the Guru”). According to Sikh tradition, Sikhism was established by Guru Nanak (1469–1539) and subsequently led by a succession of nine other Gurus. All 10 human Gurus, Sikhs believe, were inhabited by a single spirit. Upon the death of the 10th, Guru Gobind Singh (1666–1708), the spirit of the eternal Guru transferred itself to the sacred scripture of Sikhism, Guru Granth Sahib (“The Granth as the Guru”), also known as the Adi Granth (“First Volume”), which thereafter was regarded as the sole Guru. In the early 21st century there were nearly 25 million Sikhs worldwide, the great majority of them living in the Indian state of Punjab.

Sikhism emphasizes simran (meditation and remembrance of the words of God), which can be expressed musically through kirtan, or internally through naam japna ('meditation on His name') as a means to feel God's presence. It teaches followers to transform the "Five Thieves" - lust, rage, greed, attachment, and ego. 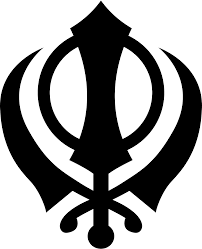 The khanda is the symbol of the Sikh faith. It is an amalgam of three symbols: a double-edged khanda (sword) in the centre, a chakkar (chakram), Two single-edged swords, or kirpan, crossed at the bottom, which sit on either side of the khanda and chakkar. They represent the integration of both spiritual and temporal sovereignty together and not treating them as two separate and distinct entities.

Sikhism developed from the spiritual teachings of Guru Nanak, the first Guru (1469–1539),and of the nine Sikh gurus who succeeded him. The tenth guru, Gobind Singh (1666–1708), named the Sikh scripture Guru Granth Sahib as his successor, bringing to a close the line of human gurus and establishing the scripture as the eternal, religious spiritual guide for Sikhs. Guru Nanak taught that living an "active, creative, and practical life" of "truthfulness, fidelity, self-control and purity" is above the metaphysical truth, and that the ideal man "establishes union with God, knows His Will, and carries out that Will".

Khalsa - "To be pure, to be clear, to be free from" refers to both a community that considers Sikhism as its faith, as well as a special group of initiated Sikhs. The Khalsa tradition was initiated in 1699 by the Tenth Guru of Sikhism, Guru Gobind Singh Ji. Its formation was a key event in the history of Sikhism. The founding of Khalsa is celebrated by Sikhs during the festival of Vaisakhi.
Guru Gobind Singh Ji started the Khalsa tradition after his father, Guru Tegh Bahadur Ji, was beheaded during the Islamic sharia rule of the Mughal Emperor Aurangzeb. Guru Gobind Singh Ji created and initiated the Khalsa as a warrior with a duty to protect the innocent from any form of religious persecution. The founding of the Khalsa started a new phase in the Sikh tradition. It formulated an initiation ceremony (amrit pahul, nectar ceremony) and rules of conduct for the Khalsa warriors. It created a new institution for the temporal leadership of the Sikhs, replacing the earlier masand system. Additionally, the Khalsa provided a political and religious vision for the Sikh community.